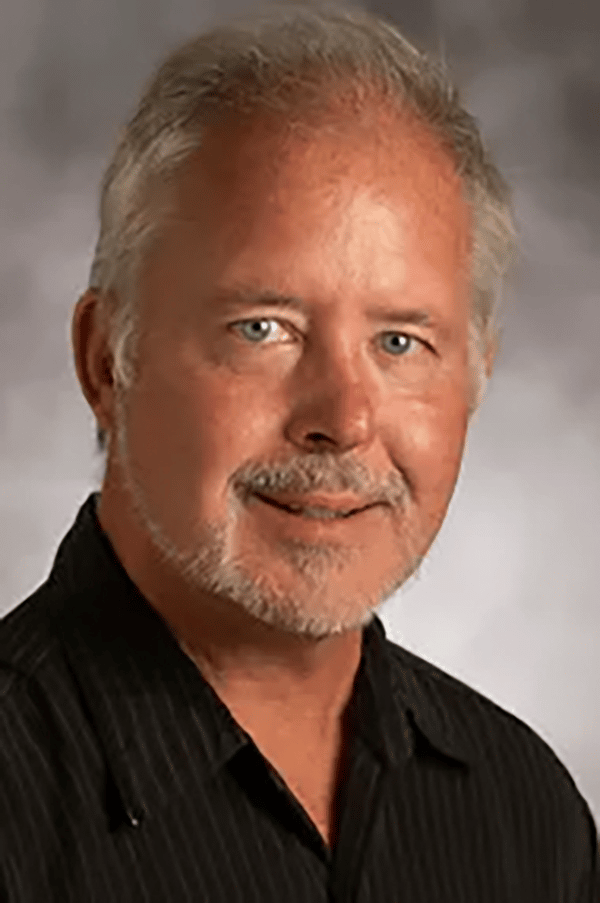 According to an article on the Wisconsin Newspaper Association website, “After more than 40 years as a sportswriter and sports wire editor with the Milwaukee Journal Sentinel, Mike Hart has accepted a voluntary buy-out from Gannett, the Milwaukee Business Journal reports.

He is part of a team of digital producers who work on content for the Journal Sentinel, Green Bay Press-Gazette, (Appleton) Post-Crescent and other USA TODAY-Network organizations in Wisconsin.

Hart is a 1981 graduate of UW-Whitewater. He began working for the Journal Sentinel in 1982. His last day with the newspaper will be Friday, Dec. 9.” 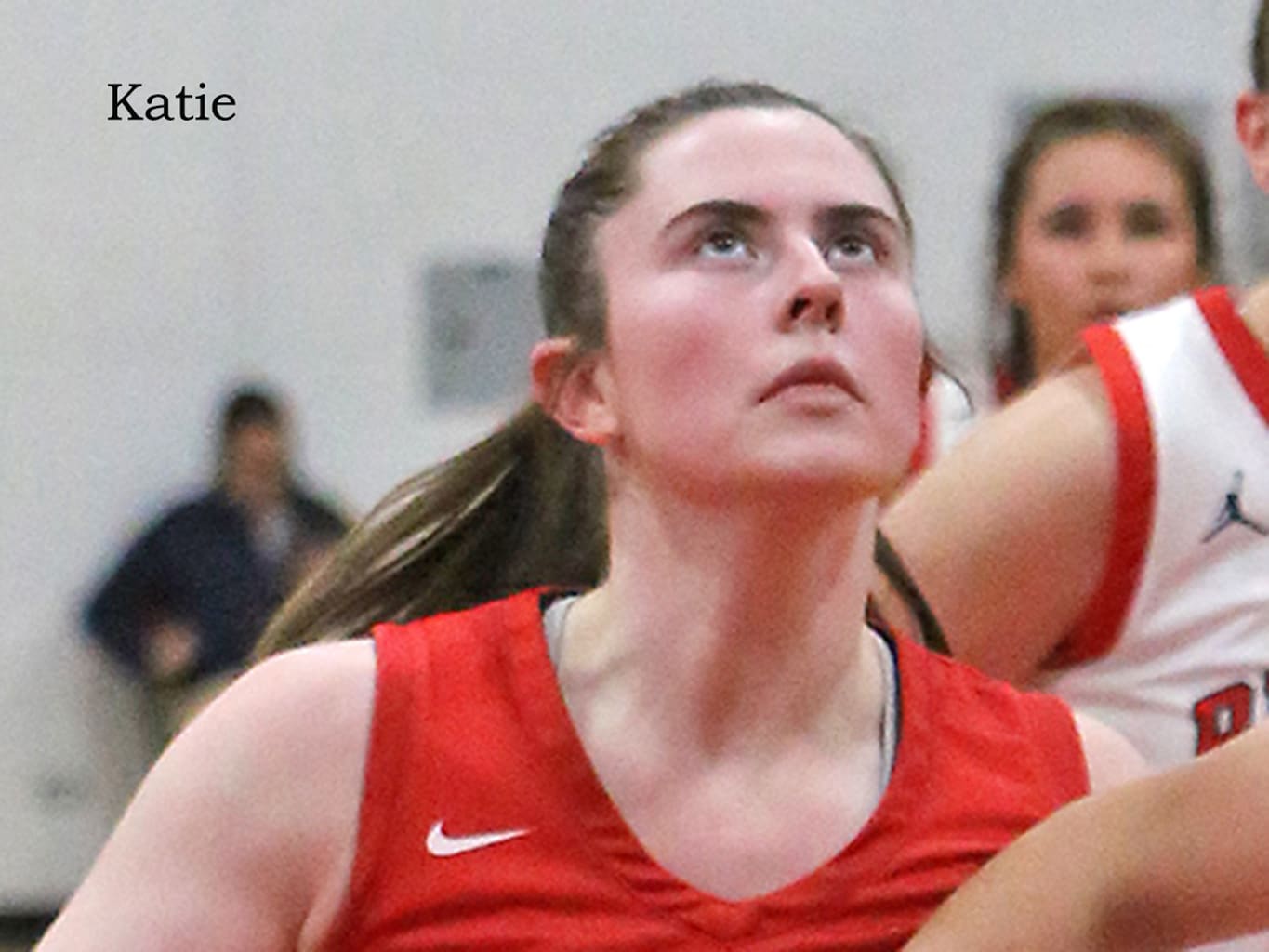 It proved to be a defensive battle with a low score of 7-6 9:00 minutes into the first half of the game. We were able to capitalize on some steals and knock down a few shots from outside to finish out the first half with the lead 20-18.

The Whippets connected a series of breaks to the rim and some kick outs for a couple 3-point shots to give an 11-point lead 32-21, with 12 and half minutes left in the game. Being in foul trouble throughout the game, our defense shut down, and Turner took over on offense going on a 21-point scoring run.

We battled until the end, but could not overcome the deficit, losing by 8, 60-52.

We travel to Jefferson this Friday, December 9, for another conference game. 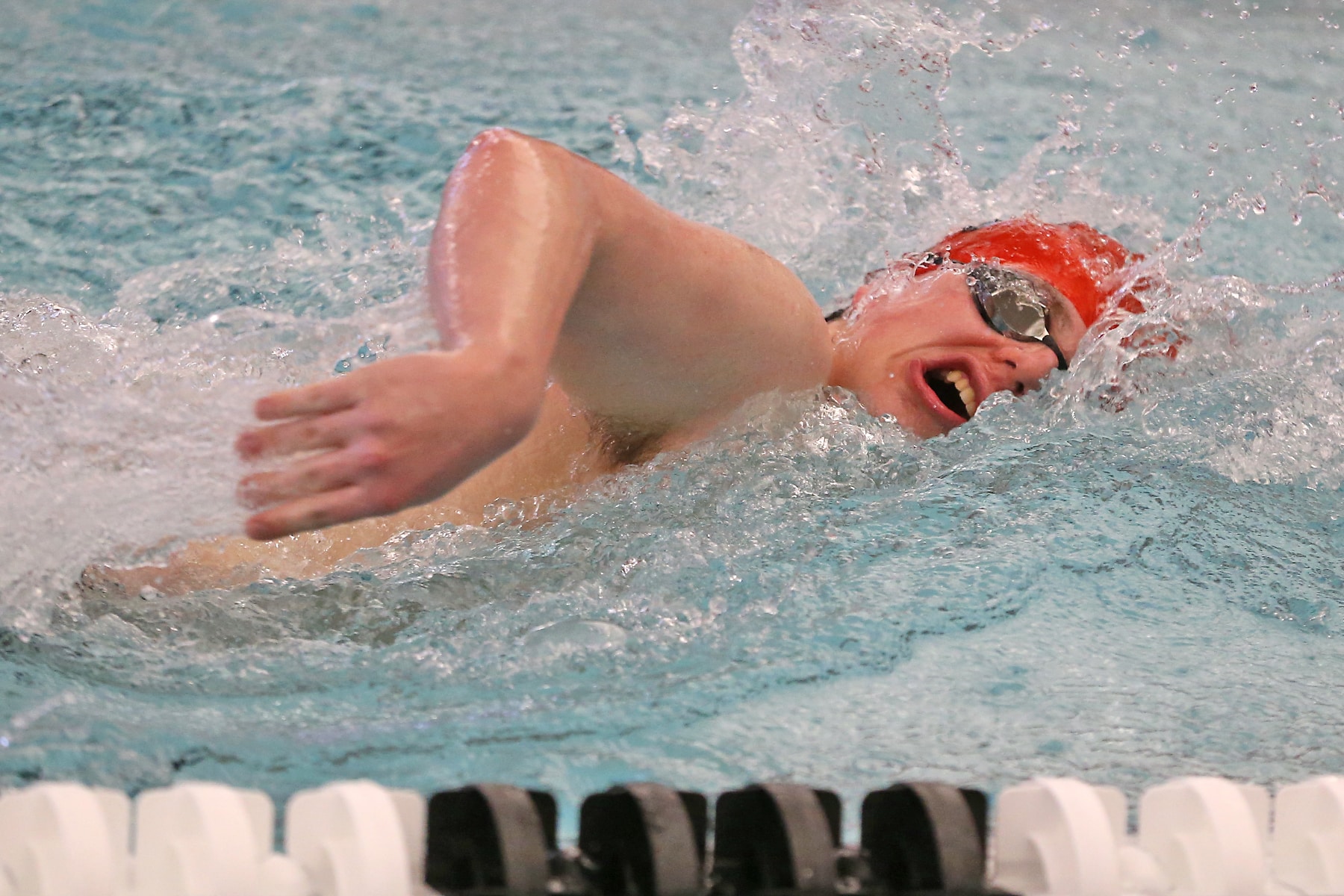 In the 1000-meter Crescendo Relay, where each swimmer swims 100-200-300-400 respectively, the relay comprised of Andrew O’Toole, Cruz Aranda, Jack Hefty, and Tyler Arnett swam strong throughout the race. This strong performance led to a 3rd place finish and geared up the team for other mentally challenging races.

The splash and dash of the evening was an amazing event to watch! Each swimmer sprints one length of the pool for a total of 100 meters to find out how quickly they can get themselves up to speed. With just over 2 seconds separating 2nd thru 5th place, the boys were able to clinch 2nd place. Cruz Aranda led off the relay followed by Jack Hefty, Myles Morse, and then Tyler Arnett for a time of 58.01!  David Enns, Xavier Zei, Onyx Thompson, and Sam Nickelsburg won their heat which was fabulous as well!

The 500-meter Crescendo Relay, 50-100-150-200, was the highlight of the night for the team. The boys came back from almost being a full length behind the 3rd and 4th place teams to taking the 3rd place medal position! There were a lot of fast swims at the beginning of the race and the swimmers’ mental toughness allowed for them to come back strong. Miles Nickelsburg, Cruz Aranda, Jack Hefty, and Tyler Arnett came in with a time of 5:52.79.

Then on Saturday, December 3rd, the Whippet Boys’ Swim Team competed at the 2nd Annual Tom Lieder Invitational in Milton. There was success for each swimmer in their individual swims, and two were able to grab hardware in their events.

Tyler Arnett started off by taking 3rd in the 200 Free. He out-touched the next person in the final yard of the race.

In the 500 Free, Tyler Arnett came on strong, and this was a grueling match-up from several swimmers from other teams. He was able to hold strong until the end; he finished first and again out-touched 2nd and 3rd place by less than half a second.

The boys swam fast and are looking forward to their next away meet against Edgerton/Evansville on Tuesday, December 6th. 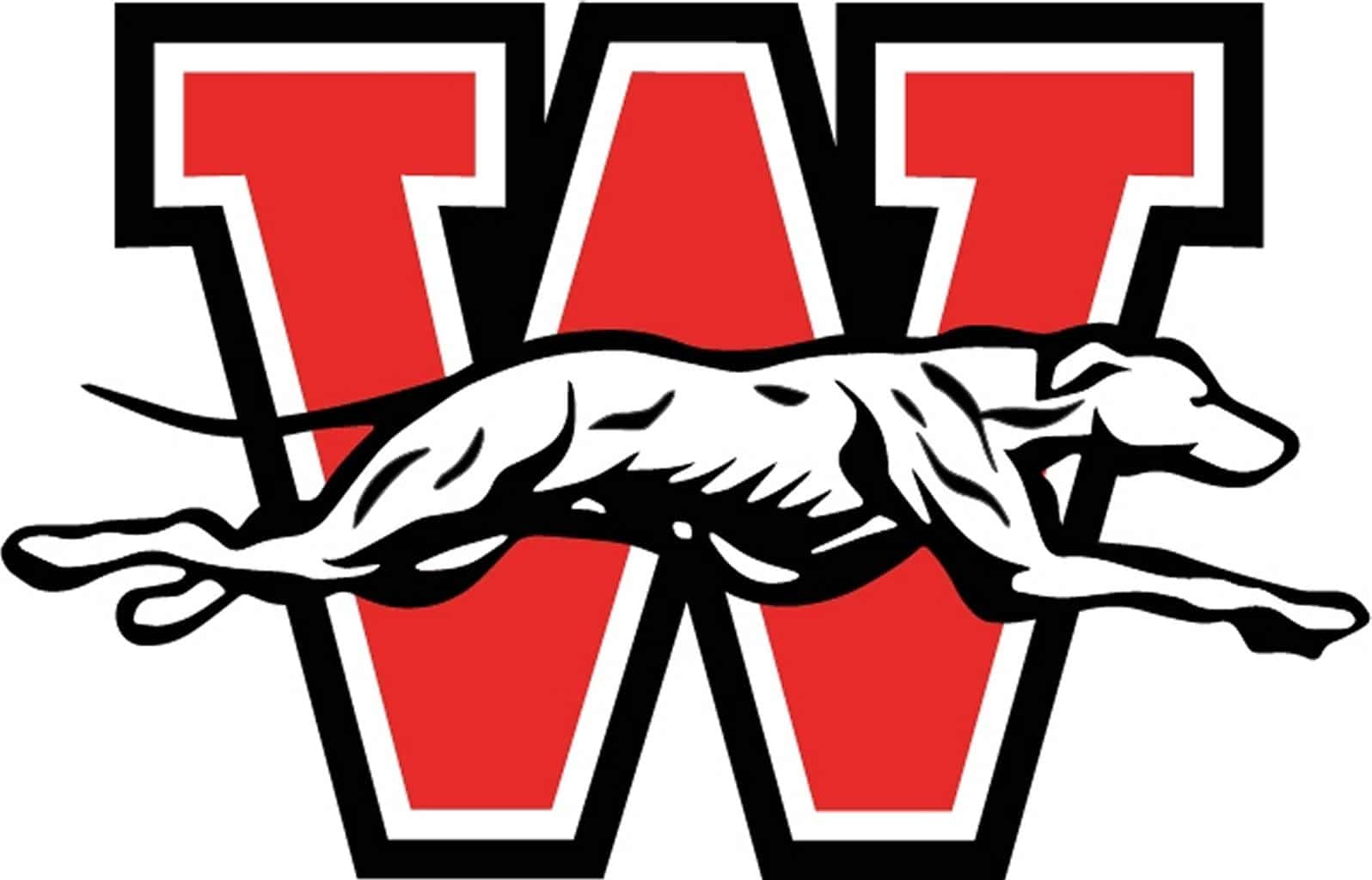 Our Whippet Gymnastics team had a great 1st meet of the season where they placed 3rd overall at the Jefferson Invite on Friday, December 2.

Next up was beam where Myialynn Cobbs had a no fall beam routine. We also got to cheer on Brenda Aguilar for the first time in a while after taking a year off. We’re so happy to have her back with us.

The third rotation allowed the girls to show off their fun floor routines. Freshman Alexa Wildenberg was able to compete in her first ever gymnastics meet and performed well, while putting on an entertaining routine. Nola Coburn showed us her spunk in her floor routine where she scored close to her personal best.

Last up was vault where all the girls did awesome! Both Makayla Bazeley and Halee Peters had lifetime best scores with a 7.75 and 8.425, respectively.  Halee earned herself another medal with a 2nd place finish.

We are so excited to watch the girls progress through the season. What a great start to what will be an amazing season! 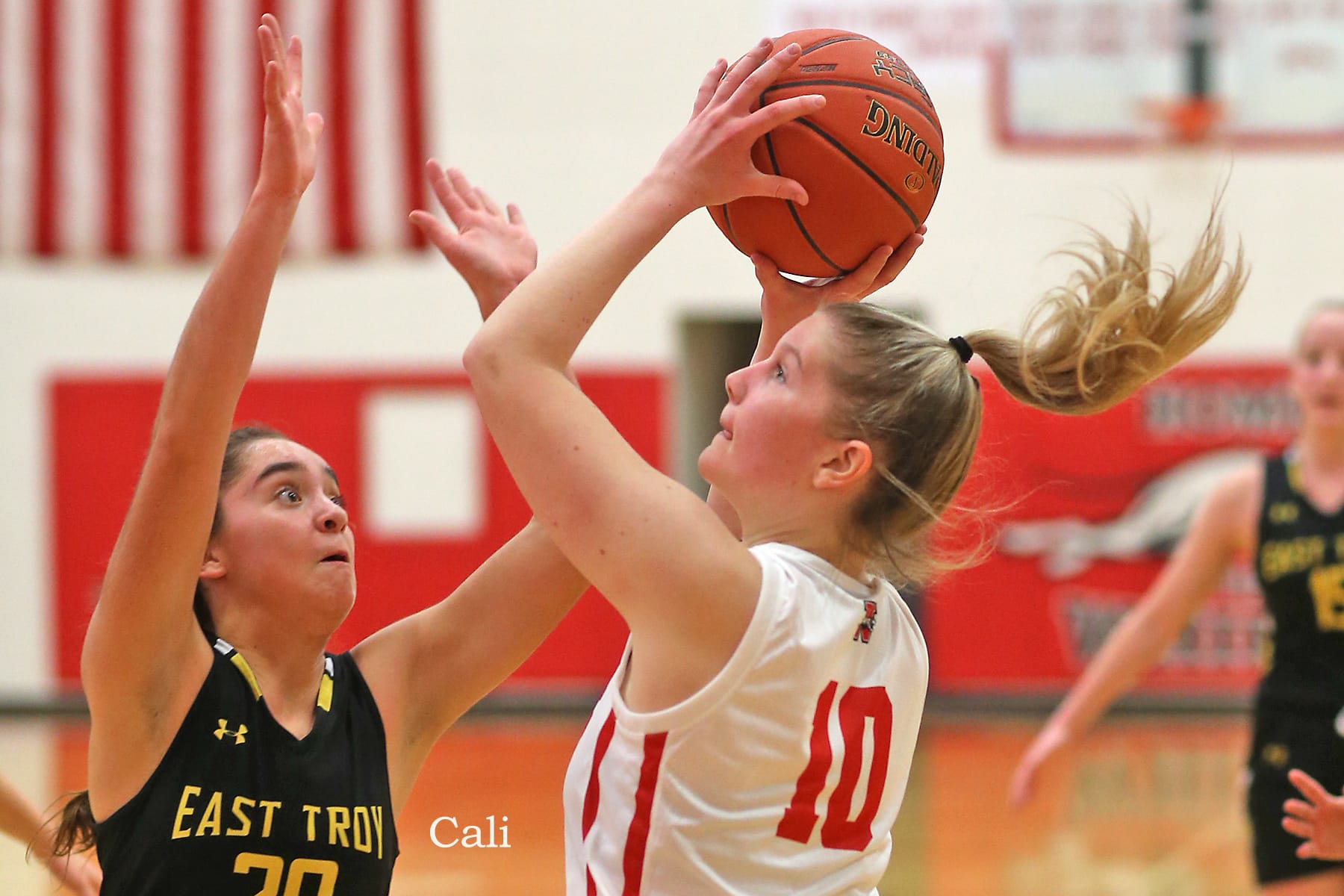 The Whitewater Girls’ Basketball Team faced East Troy Tuesday night, December 1, at home. The Whippets got off to a slow start offensively, getting outscored 11-24 in the first half. The second half proved to be an even bigger challenge getting into a 20-point deficit with 10 minutes left in the second half. The Whippets fought back, outscoring East Troy 23 -19 to get within 10, but ran out of time, losing 34-44.

The Whippets travel to Beloit Turner Tuesday, December 6, for their next conference game. 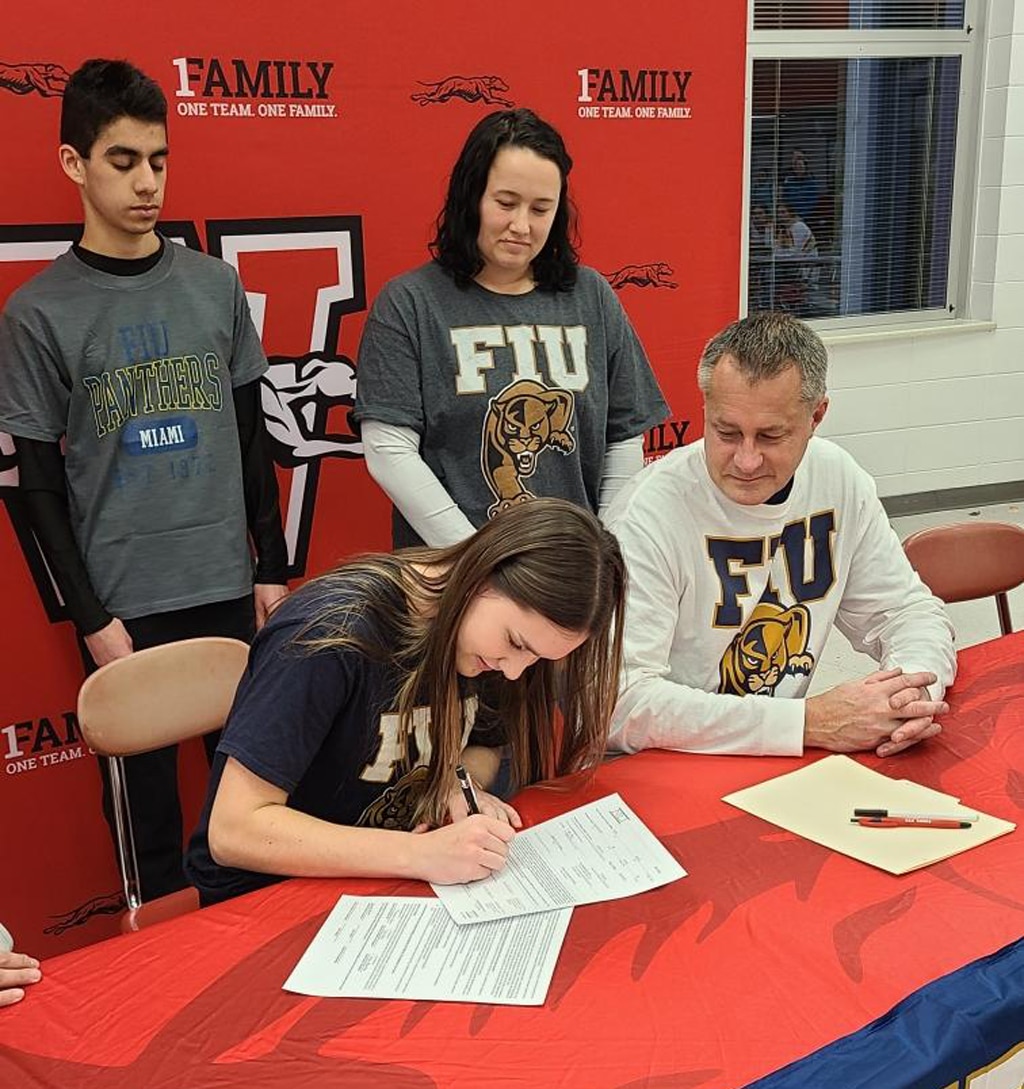 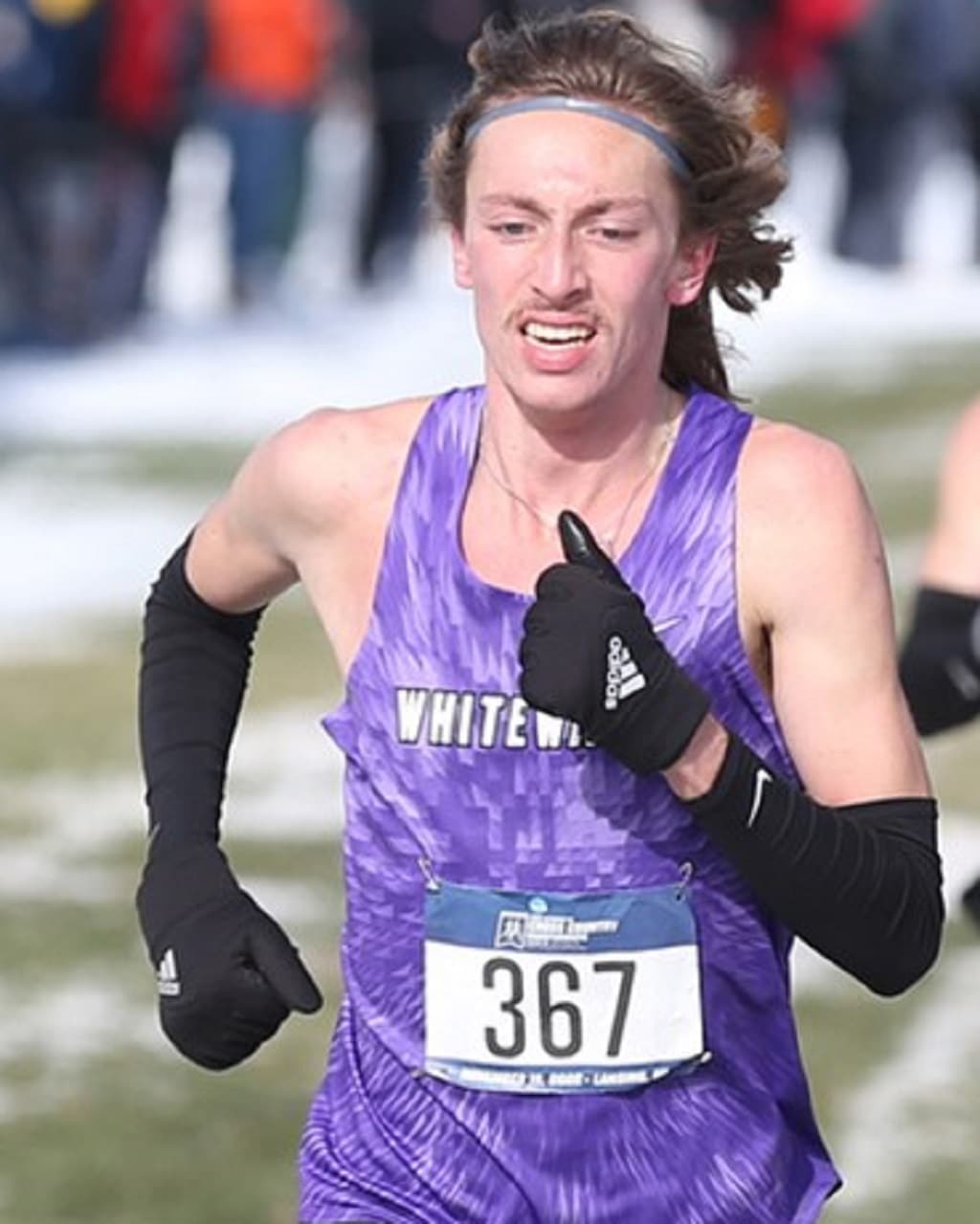 University of Wisconsin-Whitewater’s Christian Patzka has been named the 2022 Wisconsin Intercollegiate Athletic Conference (WIAC) Kwik Trip Men’s Cross Country Athlete of the Year, while UW-La Crosse was selected the Kwik Trip Coaching Staff of the Year, based on voting conducted by the league coaches.

Patzka is the second Warhawk to receive the conference honor, joining David Fassbender (2021). Patzka finished as the individual runner-up at the NCAA Division III Championship. His second-place performance is the highest in school history. He claimed the individual title at the NCAA Division III North Regional with his time of 24:08.4 breaking the course record. Patzka took second at the WIAC Championship and finished no lower than second place in any meet during the 2022 campaign. He won the Concordia University (Wis.) Ken Weidt Classic and UW-Whitewater Tom Hoffman Invitational. 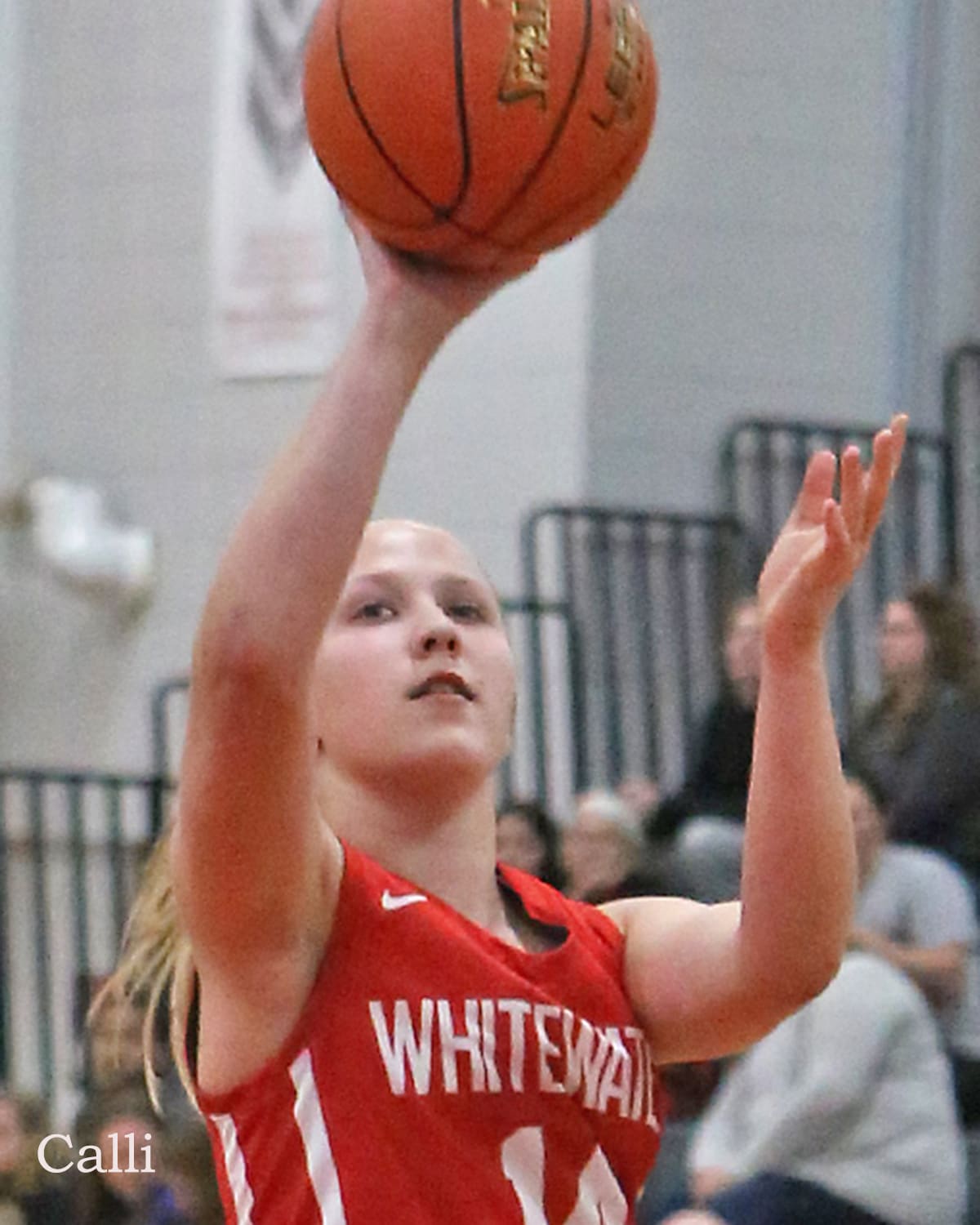 Whitewater continued to struggle offensively, getting into an 18-point deficit halfway through the second half. Then the Whippets got fired up after a series of deflections and steals going on a scoring run closing and the gap to within 6. We ended up outscoring the Elks 33-28, in the second half of the game, just not quite enough to get the win, with the final score, 47-54. 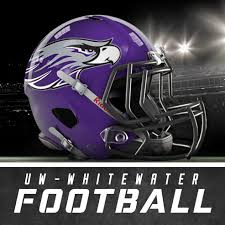 COLLEGEVILLE, Minn.—University of Wisconsin-La Crosse’s Joey Stutzman and UW-Whitewater’s Evan Lewandowski have been named two of the 15 semifinalists for the 2022 Gagliardi Trophy, an accolade presented by Jostens, Inc. and the J-Club of Saint John’s University to the most outstanding football player in National Collegiate Athletic Association (NCAA) Division III.

Thirteen seniors, one junior and one graduate student make up the semifinalists for the 2022 Gagliardi Trophy.

The Gagliardi Trophy, given annually since 1993, recognizes excellence in athletics, academics and community service. The award is named after John Gagliardi, Saint John’s legendary Hall of Fame head football coach who retired in 2012 with 489 career victories, the most in college football history. He passed away in October 2018 at the age of 91.

Stutzman is the third player for UW-La Crosse in the last six years to be named a semifinalist for the Gagliardi Trophy, joining wide receivers Nick Holcomb (2017) and Cole Spieker (2019). Running back John Janke (1993), quarterback Craig Kusick (1995) and wide receivers Scott Burnoski (2004) and Holcomb (2017) have been named finalists for the award.

Named the 2022 WIAC Kwik Trip Offensive Player of the Year, Stutzman helped UW-La Crosse to a share of the WIAC title this season – the 34th in program archives. The Eagles also earned a spot in the NCAA Division III playoffs. He led the team in rushing attempts (236) and yards (1,189), while finishing second in rushing touchdowns (5) to earn All-WIAC First Team accolades. Starting all 11 games in 2022, Stutzman averaged 5.0 yards per attempt and 108.1 yards per game. He led the WIAC in rushing attempts and yards. Stutzman also had 18 catches for 212 yards and one touchdown this season.

Stutzman had 24 carries for a career-high 180 yards (7.5 average) with one touchdown in UW-La Crosse’s 30-3 win at the University of Dubuque (Iowa) on Sept. 10. He was named the WIAC Kwik Trip Offensive Player of the Week after rushing for 108 yards on 21 carries and catching three passes for 67 yards and a touchdown in UW-La Crosse’s 38-35 win at No. 24-ranked UW-Oshkosh on Oct. 29.

Stutzman is majoring in physical education and maintains a 3.17 grade point average.

A senior transfer, Lewandowski wrapped up his second year as a Warhawk this season. He secured All-WIAC honorable mention recognition after helping UW-Whitewater to its 39th conference title and a spot in the NCAA Division III playoffs.

Lewandowski, a team captain for the 2022 campaign, is a human performance major with a minor in sport management and carries a grade point average of 3.725.

The 40-member Gagliardi Trophy national selection committee reviews the credentials, ranks the candidates 1-15 and casts their votes. Fan balloting, which is available on D3football.com, accounts for the 41st ballot, and is being conducted on D3football.com for the 12th consecutive season. Fans will be permitted to cast one ballot per device, through 12 p.m. Central on Dec. 3.

No J-Club members vote as part of the national selection committee. 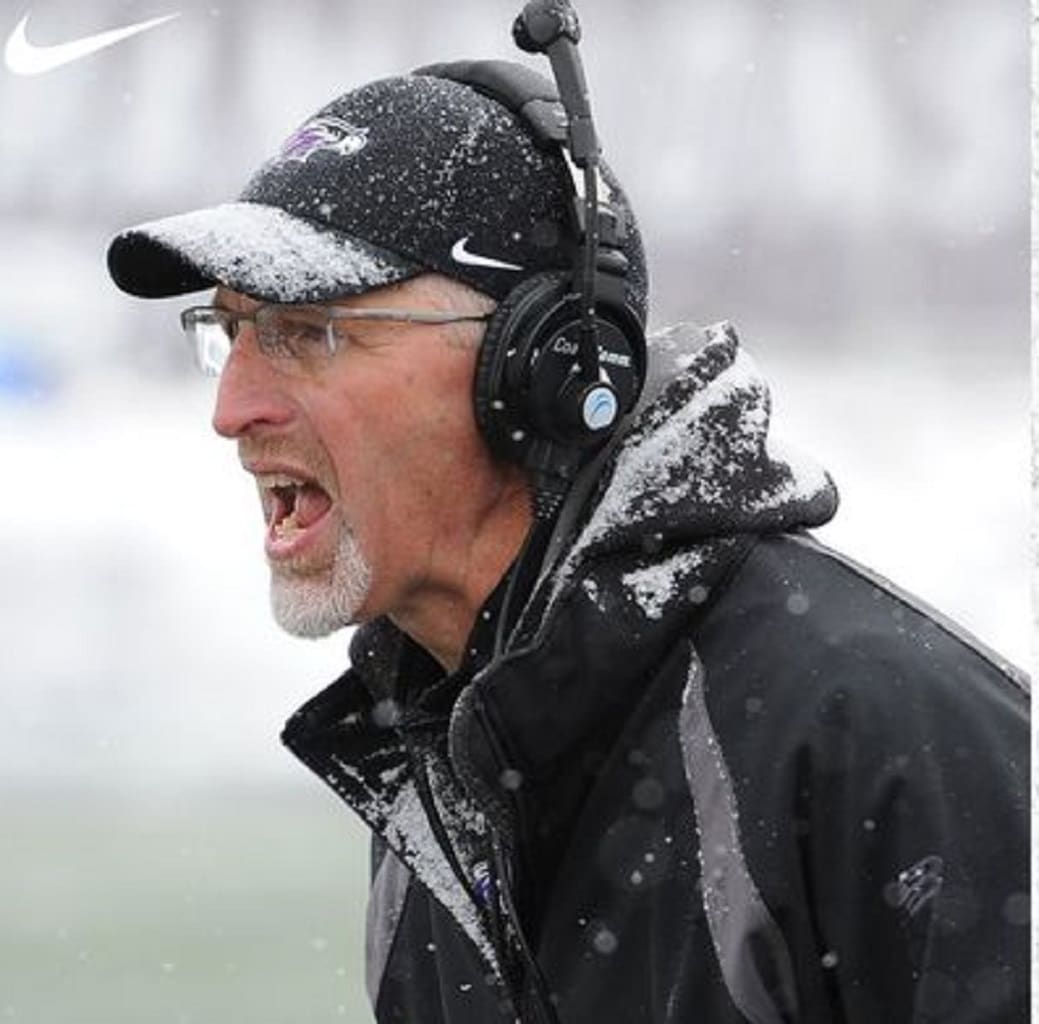 University of Wisconsin-Whitewater head football coach Kevin Bullis has announced his retirement after fifteen seasons with the Warhawks including the last eight at the helm. Assistant head coach and defensive coordinator Jace Rindahl has been named the interim head coach.

“It has been an honor and pleasure coaching and teaching in the Warhawk football program and UW-Whitewater,” said Coach Bullis. “I will greatly miss the students and staff. Kathy and I have lived truly amazing coaching lives and it is time for us to live life.”

Coach Bullis joined the Warhawk football staff in 2008 as an assistant before taking over as head coach in January of 2015. He is just the fourth head coach in the last 60 years and 21st head coach in program history.

Bullis led the program through the cancellation of the 2020 season due to the COVID-19 pandemic and the return to action in 2021.

In seven competition seasons as the head coach, Bullis has compiled an overall record of 78-13 (.857) including a 45-4 (.918) mark in the Wisconsin Intercollegiate Athletic Conference. His overall win percentage is second only to his predecessor, Lance Leipold, in the history of head coaches in the WIAC that have led programs for more than two seasons. Bullis ranks third among active coaches with at least five seasons in the NCAA, any division, for win percentage.

UW-Whitewater participated in the NCAA Division III playoff six of seven seasons under Bullis and claimed at least a share of the WIAC title five times including the program’s 39th conference championship this season. Bullis led the Warhawks to a national runner-up finish in 2019 and semifinal appearances in 2015, 2018 and 2021. In total, since Bullis joined the staff, UW-Whitewater reached the Stagg Bowl, the NCAA Division III championship game, seven times and has won eleven league titles.

He has coached UW-Whitewater players to more than 35 All-America honors, six WIAC Player of the Year accolades and nearly 120 all-conference honors. Bullis was selected the WIAC Coach of the Year in 2016, 2018 and 2021. He added d3football.com Region 6 Coach of the Year honors in 2021.

Adopting the Division III philosophy of valuing the balance of academics and athletics, Bullis coached players to six Academic All-America honors including the 2019 College Sports Information Directors of America All-American of the Year in 2019, numerous Academic All-District accolades and a multitude of conference scholar-athletes. Additionally, the Warhawk football team has logged more than 1,000 hours of community service working on initiatives with Special Olympics of Wisconsin, Fairhaven Senior Community and the Whitewater Food Pantry under Bullis’ leadership.

“Kevin is a great coach and an even better person,” said Athletic Director Ryan Callahan. “The life lessons he taught his student-athletes, coaches and colleagues will continue to be felt for years to come. I’m forever grateful for my time with Coach Bullis and excited for him and his family on his retirement.”

A national search for the next Warhawk football head coach will begin early in 2023.

Editor’s note: The photos are from the UW-Whitewater Warhawk Football Facebook page.