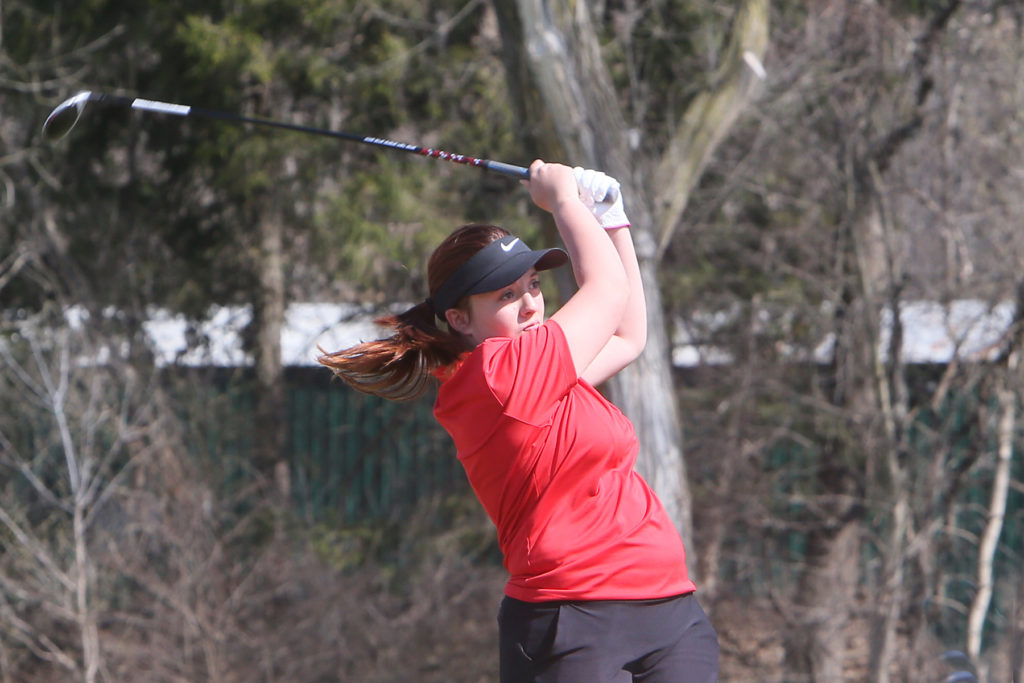 “The Golf Coaches Association of Wisconsin (GCAW)” is pleased to announce that Billie Jo Parker of Whitewater High School is a 2018 High Honors Academic-All State honoree. Students are submitted by GCAW coaches if they meet the following criteria: 1) A cumulative GPA of at least 3.25, 2) participation in at least 75% of their team’s varsity matches, and 3) are a sophomore, junior or senior. Billie Jo is a student-athlete who has served as a great example to others, proving that athletic and academic success are not mutually exclusive.

The GCAW is proud to announce that a record 375 students from 128 different high schools have been honored this year. In fact, the average GPA of these students is an exceptional 3.755.

The GCAW was formed by high school golf coaches in 1986 to help build and enhance Wisconsin’s reputation for developing quality junior players by promoting golf in our schools and communities. Besides honoring both boys and girls who succeed as student-athletes, the association also selects an annual All-State team for boys and girls based on their playing ability.

Senior Billie Jo Parker closed out her high school golf career Wednesday afternoon, competing in the WIAA Division II Sectional hosted by Kewaskum High School at Kettle Hills Golf Course. Parker entered the sectional as a fourth place individual qualifier and finished with a final round score of 82. Wednesday’s culminating competition for Parker marked the end of a successful four-year run on the Whippet golf team, a fact not lost on her. “I feel grateful that I have been able to be apart of a great golf team. I have met great friends through the team and I have been given many great opportunities,” Parker stated.

On the front nine, Parker got off to a slow start with a triple bogey on the third hole, leaving her to reflect, “I wish I could have taken back my tee shot that went into a bush area.”

Regardless, Parker persisted and fired a two-over par 38 to put herself in early contention, entering the back nine with high aspirations. “I wanted to be able to take that energy from the front nine to the back,” she stated.

Unfortunately, on the back nine, she found some of the early control from the front nine slip away. “Billie Jo is as steady as they come and although she didn’t have the pinpoint accuracy that she had on the front, she did enough to limit the damage and come in with a very solid back nine score”, Coach Wiegman said.

Parker finished the back nine with a 44. When asked what she was feeling as she potentially watched her last putt fall into the hole on the par five 18th, Parker stated, “It kind of hit me that it might be the last putt I make in competition for high school golf. But I also thought about all I have accomplished this year, and it felt great being able to end my season with a good score.”

After watching his senior leader finish her career, Coach Wiegman had some high praise for the four-year varsity player, saying that “Billie Jo continued to battle and persevere through some tough second shot positions. She never lets emotion get in the way of her next shot. I couldn’t be more proud her. Even though she didn’t qualify to play at U-Ridge, she ended the season on a high note, with a really great round.”

Wednesday at Ives Grove Golf Links in Racine, WI, the Whippet Golf Team competed in the WIAA Division 2 Regional hosted by Racine St. Catherine’s High School. The Whippets finished with a team score of 427. The team was led by senior Billie Jo Parker, who fired an 18 hole round score of 88. Her score qualifies her as an individual for the sectional meet next Wednesday at Kettle Hills Golf Course in Richfield, WI, and hosted by Kewaskum High School. Parker was 18th overall and finds herself competing for a chance at the WIAA State Invite held at University Ridge Golf Course. Senior Tommy Cushman fired his best round of the season coming in with a 103. Seniors Jacob Zuehlke and Jon Brunner shot rounds of 120 and 116 respectively. Junior Bowen Babcock rounded out the scoring with a final round of 123.

Parker will be teeing off at approximately 9:30 a.m. at Kettle Hills Golf Course next Wednesday, May 30th.

Article and Photos by Coach Wiegman

On Wednesday, Whitewater senior Billie Jo Parker entered the Rock Valley Conference (RVC) Invitational comfortably seated in the top ten after last Thursday’s regular season mini-meet. Parker only needed to maintain her conference season average of 43 to secure all-conference honors. Playing in beautiful sunshine at Riverside Golf Course in Janesville, Parker fired a career-low 18-hole round of 77 to finish third place overall and secure those all-conference honors. Parker found herself with a few pre-match nerves heading into her tee time at her final conference meet, stating, “I was quite tense but slowly got into the round.”

Starting on the back nine, Parker shot a 38 with birdies on the 14th and 18th holes, making her 18th hole birdie with a chip shot. According to Parker, “Shooting a 38 for the first 9 got me really pumped for the back 9, especially being able to end the front 9 with a birdie chip. Breaking my personal best by scoring under 40 gave me a huge confidence boost for the rest of the day.”

On the final nine holes, Parker continued a hot streak shooting even par through hole six. On hole seven, she found herself in trouble with an errant drive into the left rough and finished with a triple bogey. After the triple bogey, Parker explained how she chose to lean on her four-year varsity experience. “I always tell myself when I have a bad hole that it’s in the past and the next hole is a fresh start. Being in that mindset help me push through to the very end.”

Using that experience, Parker finished with a bogey and par on the following holes, ending with a front nine score of 39. After, she reflected on her golf journey saying, “Being able to end my senior year of golf by placing third is absolutely amazing. I felt that I have worked hard not only the four years of my high school golf career but all the years before (beginning at age six). And I’m glad to say that all that work has paid off.”

The Whippets finished with a team score of 410, good for 6th place overall. Senior Jacob Zuehlke finished with a final round score of 108, continuing his steady improvement throughout the season. Fellow senior Tommy Cushman finished with a score of 112, and Bowen Babcock and Jon Brunner rounded out the scoring for the Whippets with scores of 113 and 126. Next up, the Whippets will compete in the WIAA Division 2 Racine St. Catherine’s Regional held at Ives Groves Golf Course on Wednesday, May 23.

Billie Jo Parker, pictured in this file photo, led the Whippets with a 43.

Thursday afternoon, the Whitewater Whippet golf team finished up the Rock Valley Conference (RVC) regular season with a nine-hole match at Decatur Lakes Golf Course, hosted by Brodhead High School. Leading the way for the Whippets was senior Billie Jo Parker with a final round score of 43. Having led the Whippets all season with a nine-hole average of 43 in conference play, Parker will head to the RVC Invitational next Wednesday, hosted by Riverside Golf Course in Janesville. The four-year varsity player will look to secure all-conference honors at the invite. Parker has been a model of consistency in conference play having fired rounds of 41, 43, 43, 43, 45.

Fellow senior Jacob Zuehlke fired a 48 for his season low score. Seniors Tommy Cushman and Jon Brunner each shot 52, and junior Bowen Babcock followed with a 54.